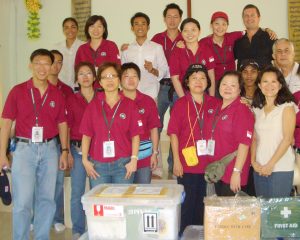 About 20 km from Phnom Penh,  in the middle of the Tonle Sap River, is an island community called Koh Rumdual, formerly known as Koh Kho (Death Island) during the Killing Fields days. (Some years back, the inhabitants changed the name to Rumdual, which is a beautiful white flower found in Cambodia.)

During a visit to visit our partners in Cambodia, I accompanied a medical mission to the island, composed of our FCF partner staff and members of St. John’s Medical Brigade from Singapore, who offered free medical services to the islanders.

Inhabitants range from blind, handicapped, land mine victims, some suffering from multiple sclerosis and confined to wheelchairs, and some widows with 7 or 8 children. Their houses are in a serious state of disrepair due to lack of funds, allowing the rain and insects free reign, and the numerous children in the households often suffering from the elements. 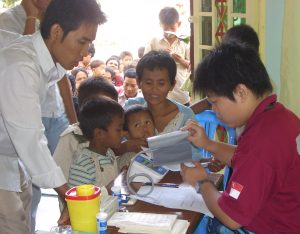 Through a grant from Family Care, land was purchased to build a school. Independent donors from Singapore, Australia, Hong Kong and the US all contributed toward the building of the school. A solid academic education is now available to the island children.

To this day though, many of the inhabitants survive on what the island produces: seasonal fruits, tree leaf soup, frogs and lizards that they hunt and grill for their meals. Needless to say, work remains in helping this community with dietary education and livelihoods to better their lifestyles.