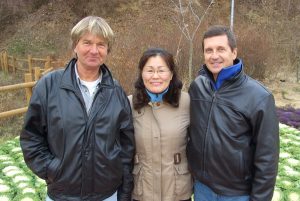 I spent the day with Tim Peters and his wife Sun-mi who work with North Korean refugees. Also attending our meetings was Dr. Norbert Vollertsen (shown on left in photo), another North Korean activist, who blew the whistle on the atrocities in North Korea some years back, and was expelled from North Korea in the process.

Since that time, both of these brave men have continued their good work, including lobbying in Washington DC, testifying before U.S. Congress and so forth.

Tim Peters and his organization, Helping Hands Korea, were featured in a TIME magazine cover story. Helping Hands Korea provides advocacy and refuge for North Korean refugees in China, transports refugees via the Underground Railroad to safer countries, and also feeds the vulnerable in schools and orphanages inside North Korea.