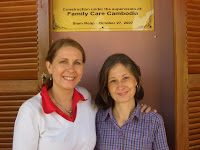 Today I visited Siem Reap (northwest Cambodia, adjacent to Thailand) along with Family Care Cambodia rep’s, during which time we also passed by the nearby historic ruins of Anghor Wat.

Our main reason though was to tour a school renovated this past year by Family Care Cambodia, which included the addition of a building housing 3 classrooms, a computer lab and bathroom facilities suitable for the 1200 students in attendance.

At the request of the Dept. of Education, it was also arranged for us to visit another provincial school situated on 30 acres of land that the Dept of Education would like us to develop, the goal to set up a showcase pilot school that they could be used as a base to train administers and teachers from other rural schools. Training would range from academic to IT to music & drama to agriculture (the latter including use of organic fertilizer to use of fuels.)

To illustrate the vast educational needs of the children and teachers in the area, allow me to share an anecdote from our meeting with the provincial head of the Dept of Education. This dear fellow, who was a visionary amongst his peers despite his years of internment under the Khmer Rouge, told us frankly he had never even heard of computers until 1997! And he then went on to say he had then not had the opportunity to use one until the year 2000!

Ending with, “If I, the head of Education, say this, that indicates how thankful we are for the computer labs you have already installed for the children of my country to learn with!”