As we drive, we conclude that the clean-up after the tsunami has been massive, as well as impressive, in that the remaining piles of bricks and concrete are now quite far and few between.

Everywhere, construction is underway, new highways and roads, new buildings and houses. But this is a massive undertaking, with another 100,000 housing units still needed, plus everything that goes with it!

Now almost two years after the event, everywhere I’ve gone today I have seen new permanent housing in varying stages of construction. There are few structures more than two years old. Almost everything we see today is only in existence thanks to massive grants from dozens of government agencies from around the world, not to speak of the hundreds of NGOs, each reconstructing their portion of a giant puzzle of new buildings and amenities. 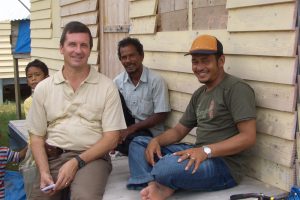 I visit a village where 1200 people once lived. –Today, there are only 12 original members of the village living there, the few who survived. One was a child washed 2 miles further into town, somehow surviving the largest “ride” of all time!

The beachfront reveals concrete pilings, where once a highway stood. Today the highway we drove there on has been rebuilt two miles inland from where the highway originally was. 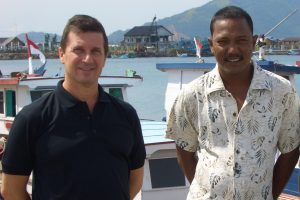 I met the fisherman whose large fishing boat, which takes some 25 men to sea at a time, was hauled back to the sea …from where it had been found 2 miles inland the day after the tsunami! This move, requiring huge caterpillars and earth-moving equipment, was facilitated almost 2 years back by our Family Care Project Manager here in Indonesia. Before the tsunami, there were 21 of these large fishing boats in the harbor. Today there are only 6, the one Family Care saved, among them. And I might add, moored in a new, still-being-constructed, harbor.

All photos and text © 2009 by Grant Montgomery.