Today we drove further down the west coast of Aceh, the part that had gotten battered the most the day of the tsunami, an area covering 28 villages. –24 of which were hot extremely hard, some literally wiped off the face of the earth. 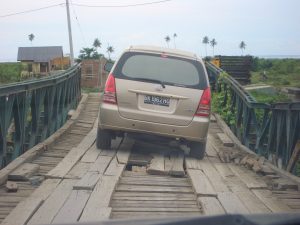 We drove the main coastal road, which consisted of paved sections interspersed with sections of new grid road, the latter jutting off on tangent detours where the original paved road was totally wiped out. (And where if it were now standing, it would be underwater.) So the drive consisted of portions of paved road, followed by patches of new, yet very bumpy grid road, and all sorts of bridges, dangerously old and temporary new. One old twisted metal bridge, which we remarked was barely standing. By the time we made it back to the bridge at the end of the day, and more trucks had gone over it, the bridge had caved in even further. In a few days it may well be unusable.

To add to the chaos, the government built the new sections of road on private property and now as a protest, the locals have laid trees and rocks on sections of the new road, and posted signs protesting the government having built these roads without paying them for their land. If and when this gets sorted out, USAID stands ready to pave the whole road the entire length of the coast. 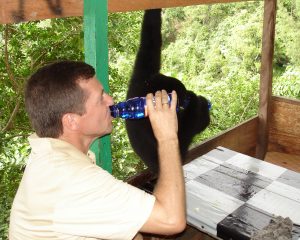 At one point, we stopped for a drink at 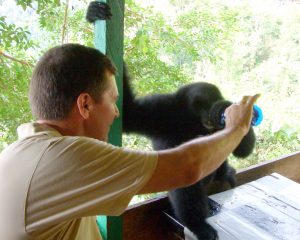 a roadside place and a monkey swung in the open window from a nearby tree, grabbing a half empty bottle of Gatorade.

And the monkey later knocked back a second bottle we offered!

All photos and text © 2007 by Grant Montgomery.