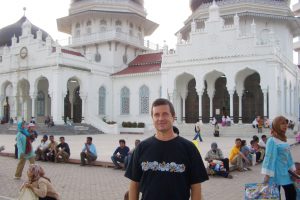 Due to the armed conflict over natural gas and other resources between locals and the federal Indonesian government, heavily-Muslim Aceh province had been virtually closed to foreigners and the outside world for 30 years –until the tsunami disaster.

Nowadays, these dear folks  are very open to and thankful to the States and other western countries that have been helping them rebuild. –Sure builds a case for aid creating friends, rather than troops being sent in. 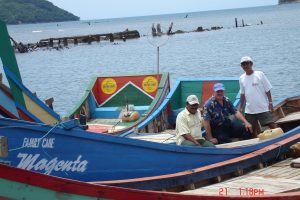 Tomorrow I will begin touring the coastal area to check up on the replacement fishing boats that Family Care Indonesia built and distributed immediately after the tsunami, having given back a livelihood to many, as well as reviving the local economy through boat building etc.

Actually these Family Care boats won the distinction of being “the first fishing boats back in the water after the tsunami” and appeared in the documentary “Aceh and Its Success Stories One Year On” highlighting Aceh reconstruction. 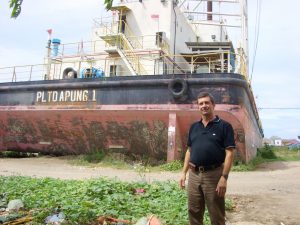 Additionally, the UN-FAO chose a supervisor from the boat-making operation that Family Care Indonesia frequented to be trained to handle quality control for manufacturing for the whole province.

Among the tsunami “monuments” we encounter: We stopped off to check out a 2000-ton barge that still rests on top of part of a neighborhood, 2 miles inland! (see photo)

All photos and text © 2008 by Grant Montgomery.