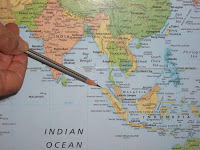 After my first full day in Jakarta (the capital of Indonesia) visiting two orphanage programs, I catch the 3-hour-plus flight to Banda Aceh in northern Sumatra. (Little known fact: The span of Indonesia is basically the same as continental United States.)

Banda Aceh is the capital city of Aceh province, and epicenter of the massive 2006 Tsunami earthquake. There were almost 100,000 casualties in this coastal city alone when the wave intruded 3 miles inland, completely covering half the city in water. After the tsunami that fateful December 26th morning, bodies were found just about everywhere, and debris and anywhere from 3 – 15 feet of mud covered everything after the water receded. 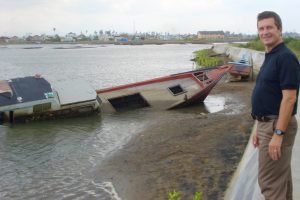 As for Aceh province, the actual shoreline is totally different than it was prior to the tsunami, now anywhere from 100 yards to 2 miles less, the ocean having bitten off and swallowed a gigantic strip of land –and all the people and houses formerly situated there.

This is not just in one isolated area but a full 500-mile length of Aceh province, basically the distance from San Diego to San Francisco, where the whole coastline just “dropped off” the face of the earth!The only way to compare the former with the present day landscape is aerial photographs taken before and after.

The amazing thing is that the city of Banda Aceh is now clean as a whistle (by Asian standards), the buildings largely restored, and the people have moved on, despite the fact that nearly everyone you meet lost loved one to the tsunami.

All photos and text © 2007 by Grant Montgomery.